Now that I’m three-quarters of the way through my New Year’s resolution to not drink alcohol in 2014, it’s time for a quick update to the “Dry Year” thread of this blog. 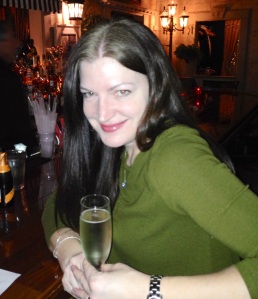 First of all, I’m very proud to report that I am still dry and I don’t miss drinking.  It’s true that I missed it early on, had mild withdrawal symptoms the first few weeks, and even had a nightmare in which I broke my resolution by inadvertently drinking a glass of wine. It also took longer than I had expected to develop the new habit of not drinking.

By the end of May, I had already achieved my goal weight and lost a total of 30 pounds (when you include the 7 pounds I lost last year). I explained exactly how I did it in this blog post.Although I had a few challenges along the way, I’m pleased to report that four months later, I am holding steady at 135 pounds, which is a few pounds below the goal weight I had set for myself.

In the first half of the year, I had also already achieved my personal record (or “PR”) marathon time. How I did that is explained here. It should be no surprise that, just as I had predicted early on, losing so much weight was the biggest contributor. 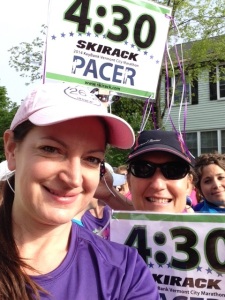 After achieving these two main goals so early in the year, I wrestled with the question of whether or not I want to start drinking again when 2015 rolls around. In the end, I decided that I want to have a glass of very nice champagne at midnight this coming New Year’s Eve and then play it by ear after that.

I also decided to add a stretch goal into the mix for the second half of 2014: qualifying for the Boston Marathon.  My first “BQ” attempt — as qualifying for the Boston Marathon is known to avid runners — on my 46th birthday in July was a real disaster. Despite that, it was an unforgettable experience to cross the finish line with a very close friend, no matter how long it took us.

This brings us to today.  This morning, I completed my last race of the season by trying one more time to BQ. I was very happy with my training plan, picked a course that had a nice sloping downhill, went to the race properly hydrated and fueled, and even wore a temporary tattoo with my mile-by-mile race plan on my forearm. All signs pointed to a great day on the course.

What was the result? I really killed the first half of the race, achieving a PR half-marathon time of 01:51:55 and stayed on my planned pace through 20 miles. Then, it got very hot and I started to slow and I worried that I might over-heat. Although I didn’t qualify for Boston, I am extremely proud of myself for pushing through the last several miles to the finish line and cutting another 19 minutes off my best marathon time. 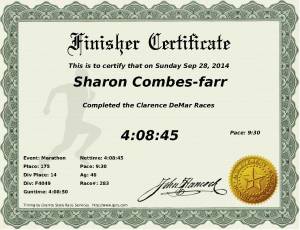 As far as qualifying for Boston is concerned, that’s a goal I will happily carry with me into 2015. If you have any other ideas for New Year’s resolutions for 2015 for me, please leave those as comments to today’s blog post.