Just before I left the office last night, a rush of emotion came over me when I realized that today would be New Year’s Eve and 2014 would soon be a distant memory. Envisioning myself at midnight tonight, I became determined to have a bottle of Dom Perignon to celebrate the successful conclusion of my dry year. Surely, if ever there would be a time to enjoy a bottle of what is widely considered one of the world’s best champagnes, the anniversary of a full year without alcohol would be it.

So, I did a bit of online searching, made several phone calls, and managed to track down the only bottle of Dom Perignon within a 20-mile radius. Luckily, I was able to reserve it and pick it up along my commute home. It turns out that the bottle is from 2003 and is in a gorgeous commemorative box, bringing, perhaps, a bit more value to the $175 price tag that I paid for the bottle. Yes, I know that it’s sort of crazy to spend that much money on one bottle of consumable liquid. However, I deserve it, don’t I?

(I was happy to find this bottle of “Dom” on short notice.)

It might be hard for someone to believe me when I say that having this special bottle to celebrate with tonight actually has nothing to do with wanting to drink alcohol again.  Recently, I very happily celebrated Thanksgiving, Christmas Eve, Christmas, and my step-daughter’s engagement party and never once thought that these milestone family gatherings would have been enhanced one iota by my drinking alcohol along with everyone else.

The best way to describe my desire to make tonight a once-in-a-lifetime celebration is to say that I am proud of myself. I can’t believe I did it. I launched my resolution and my blog exactly one year ago today, and went from enjoying a few glasses of wine every night and being a fixture at local wine-and-food-paired dinners to going an entire year without drinking alcohol.

Along the way, I lost well over 20 pounds, cut 23 minutes off my best marathon time, and, more importantly, learned a lot about the power of alcohol in our society and about myself. As added bonuses, I took an unforgettable trip to Laos to celebrate my journey and started writing regularly about my parents’ nearly four decades in the Vermont inn-keeping business.

Tonight, I’ll observe the end of a truly incredible 2014 and the promise of the New Year with family and friends over a bottle of something extra special. What happens after that is anyone’s guess. You can be sure, however, that I’ll let you know in future blog posts. Thanks for following – and, Happy 2015!

I woke up early the other day thinking about my blog and tried to come up with one good reason why I haven’t posted anything lately. (Can you believe I wrote my last post about this survey of American alcohol consumption habits six weeks ago?) It turns out there isn’t a good reason. All the things that might have caused me to put it aside—like being so close to the end of my resolution that it just seems too boring to acknowledge again; or that winter meant the end of my running season and also the need for training updates; or even the fact I just started a new job, but still had to finish up a few things for my old one—just add up to pure and simple procrastination.

It certainly wasn’t due to a lack of material. Believe it or not, the blog folder on my computer has a file for each of the five weeks I missed. The week of November 16th, I conducted several interviews and started and re-started a piece for the “Vermont Inn-trigue” thread of this blog about the inn’s most loyal guests, a group of hunters who’ve stayed at the inn each and every hunting season for the past 37 years. I interviewed the leader of this group, Tony, multiple times, heard many of his jokes and stories, and took a look at the scrapbook of his group’s many memorable times at the inn.

Tony has stayed at the Combes Family Inn each and every year during its 37 years of operation.

Just a few snapshots from the mementos complied over decades of visits to Vermont and the Combes Family Inn. 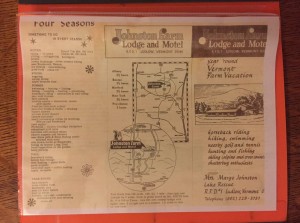 Tony saw this flyer in 1968 and decided it would be fun to scare up a group to go hunting in Vermont. The farm became the Combes Family Inn in 1978.

My first interview with the group was over dinner. When one of them asked “What’s for dinner?” my dad replied, “We’re not changing the menu unless you guys change your jokes.”

“You have a better chance of getting hit by lightning,” Tony replied. That evening, with the barbs and jibes getting lobbied back and forth, was not all that different from my first such dinner with them, when I was just 10 years old.

The night before the hunters left, we all watched the Patriots game and I had a chance to ask Tony if it surprised him that he’s been coming to the inn for 37 years in a row. “No it doesn’t,” he answered. “We’re comfortable coming here. When we leave, we’re already looking forward to coming again the next year. God willing, we’ll be coming for many more years.”

Before I knew it, the hunters were gone and I never turned that great material into a coherent article. The following week, I wondered if I should be concerned about my high levels of caffeine consumption. I vowed to research the pros and cons of caffeine and explain why people who stop drinking alcohol often become chronic coffee drinkers. This post would have been like my article about Crystal Light back in January. I found several articles about caffeine consumption, including this general overview, this one about the role coffee may play in helping people abstain from drinking alcohol, and this one citing 10 reasons to quit drinking coffee. I didn’t get very far in my research. However, I did resolve to figure out eventually which was worse, alcohol consumption or caffeine consumption. I’ll let you know when I figure that out.

Several other blog topics presented themselves in late November and early December. I briefly considered breaking with my usual M.O. by writing a political piece about the disheartening state of race relations in our country. Although I quickly ruled that out, I will share one comment that I left on Facebook that sums up my feelings about what transpired in Ferguson: “Mike Brown’s fate was sealed the moment Officer Wilson saw him him as a crazed demon that needed to be killed, rather than a troubled teen who needed to be saved.”

Two weeks ago, I almost opted to write about the end of the federal grant that I was directing and my thoughts about how that experience was personally fulfilling and even life-changing. If you get a chance, flip through “Vermont’s Digital Stories,” the final report for the project. I’m proud of the team’s work to improve lives in Vermont’s flood-damaged communities and remain very grateful to have had a meaningful opportunity to give back to others, after my own speedy recovery from Tropical Storm Irene.

Finally, last week, a friend of mine told me that she had heard an interesting radio segment about the different norms and perceptions for alcohol consumption in various countries. The point was that Americans have the lowest national tolerance (so to speak) for alcohol consumption and consume far less alcohol than most other nations. The differences are particularly acute between the U.S. and Europe, especially Italy and France. With such an interesting and relevant topic, I was certain my blog drought was going to be over. Alas, I couldn’t locate the radio piece my friend had heard. And, although I found a lot of articles about similar topics—such as this one, this one, and this one—the weekend came and went without a post.

So, now you’re all caught up on what I’ve been thinking about the past six weeks. Have a very happy holiday season—I promise to write again very soon. There’s no good reason not to.