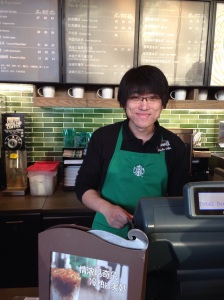 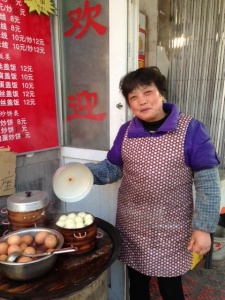 Friday was Ange’s birthday and she awoke, after only about 4 hours of sleep, on a mission. She went directly to the concierge and asked for directions from the Peninsula Hotel to two locations — the closest Starbuck’s and the closest shop with baozi. “Bao” means “bread.” This makes sense, since these small breakfast dumplings have a skin that is breadier than most Chinese dumplings (they also have delicious pork inside). Luckily, the concierge drew a handy little map, making both purveyors easy to locate. Of course, we went in search of the coffee first. 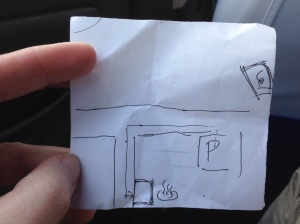 As you might have guessed already, this post isn’t about our breakfast, per se. Instead, it’s about how the two components of our breakfast really reflect the dichotomy of modern China, at least for me. Having a Starbucks on many Beijing street corners is the inevitable evolution of things here. The quest for things foreign and the embrace of controlled capitalism, combined with the humongous domestic market, made it inevitable. It was Avon and McDonald’s back in the early 80’s. Then, it was General Motors and Motorola when I lived here in the 90’s. Now, it’s Starbucks and Apple stores, and, can you believe it, even “House of Cards?”

The common thread of most of the Western things found here, then and now, is that they are largely materialistic and deemed relatively harmless by the government. Why not give your growing population of consumers these foreign goods that are, in many cases, actually made in China? What the Chinese have been less welcoming of is free thinking and other threatening Western ideas. At the turn of the previous century there was a slogan “Chinese learning for fundamental principles and Western learning for practical application.” Learn more here: http://en.wikipedia.org/wiki/Zhang_Zhidong.

That this sentiment hasn’t really changed all that much manifested itself during my short stopover in Beijing in an interesting way. It was amazing to find free Wi-Fi everywhere, along with the Starbucks and iPhones to go with it. However, imagine my frustration upon discovering that Facebook was blocked and I was unable to upload my selfies in front of the likeness of Chairman Mao and those cute lion statues. In short, China’s lack of tolerance prevented me from alerting my nearly 500 “friends” that I had returned to my old stomping ground.

Little did I know that the Chinese government has been blocking access to Facebook since 2009, when it figured out that separatists in its far northwestern Xinjiang province had been using it to communicate with its followers to coordinate demonstrations against the government.

Of all the things that could frustrate me about Beijing (like taking over an hour to navigate the airport bureaucracy to track down our luggage, the ridiculously tight security presence on Tiananmen Square, and the prevalent line-cutting mentality of the Chinese), what does it reveal about me that blocking my access to Facebook was the only thing that really irked me?

Getting back to Starbucks, it strikes me that the green and white mermaid symbol alerting passers-by to the availability of little cups of familiar, high quality, but extremely high priced, “joe” is also a fitting symbol of the modern service industry, the new millennium, youth, and capitalism, all at once.

For all the ways that Beijing had changed over the 18 years that I was away, the essence of the city and the comfortable feeling it gives me were the same. The amazing food. The flashes of color. The welcoming nature of the people. It honestly still felt like home. When I asked, “Ni hao?” (“How are you?”) to nearly everyone I passed, they all paused, smiled broadly and said, “Ni hao.” Imagine if I had said, “How are you?” to everyone I passed in New York City. They would probably have me committed.

The little mom and pop shops nestled in between the larger modern stores, like the one where we ate our baozi, are further evidence that the essence of old China still remains. The friendly proprietors invited us to sit at their sole outdoor table, as if we were old friends. As we sat, happily drinking our Starbucks and eating our dumplings, dozens of well-dressed workers in their twenties and thirties stopped in to get baozi, soy milk, and other breakfast delicacies to go, as they hurried off to work.

After a very satisfying breakfast, in more ways than one, Angela stood up, turned to me and said, “Starbucks and baozi. My job is done. Sharon, you take it from here.” I steered us purposefully in the direction of the Tiananmen Square and the Forbidden City. And, it was not lost on me that this part of our morning’s itinerary represented another dichotomy in Chinese history, the legacies of feudal times and the Maoist era…. 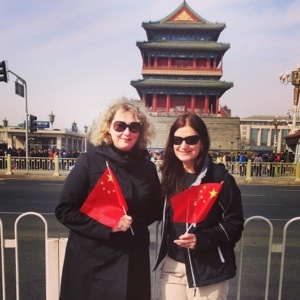 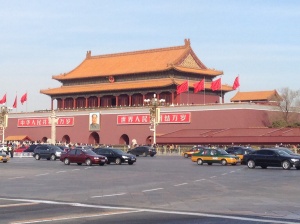