Five months ago, I wrote about “Fiddlehead Season,” a time that epitomizes the fleeting nature of early spring and reminds me of the vulnerabilities of childhood. How different that time of year is compared to leaf-peeping season, which, I should note, is lingering particularly long this year. A gloriously bright foliage is nature at its most beautiful. And, if spring is like childhood, then the colors of fall reflect the confidence that only comes with age and experience.

This autumn, more than any other, I found myself inexplicably stopping to take photos of the changing trees. On my way to work, on my way home from work, en route to the grocery story — you name it, I stopped my car, jumped out with my iPhone, and tried (sometimes in vain) to capture the sunlight shimmering in the trees. I even varied my thrice weekly drive to Montpelier, in hopes that a different route might yield more trees, more mountains, and, most importantly, more color.

About a week ago, I took an abrupt U-turn in the middle of the road, just a mile from home, in order to snap a photo of the evening light dancing across Buswell Pond. After snapping the pic and jumping back in the car, I quite literally laughed out loud and asked myself, “When did you become a leaf-peeper?”

I’m not sure exactly when it happened. But, clearly, it did. I’ve come a long way since childhood, when I vividly recall thinking that the “flat-landers” were crazy to pay nearly a hundred bucks a night to stay at my parents’ inn, just to watch the leaves change colors.

I thought then that leaf-peeping flat-landers were nothing short of a danger on Vermont’s roadways, driving so terribly slowly and often stopping suddenly, usually right in the middle of the road. “What’s wrong with these people?” I often asked myself.

The drivers from Connecticut and New York were bad enough. But the ones with unrecognizable license plates from presumably more far-flung locations took even greater risks to get just the right view of the bright foliage. It was just absurd.

My Aunt Nancy tried to explain to me that the leaves on the trees back where the guests came from didn’t change the same way ours did. I just couldn’t wrap my head around it. Although I could see the trees with their bright colors, I didn’t appreciate them and, I took them for granted.

Over the twenty years that I lived elsewhere, I missed my home in Vermont more in autumn than at any other time of year. It didn’t take long for me to discover that Aunt Nancy had been right. None of the other places I lived, Washington, D.C., Beijing, and Arizona, just to name a few, had a notable fall season. Maybe the answer to the question “When did you become a leaf-peeper?” is the fall of 2007, the first fall after I moved back home.

That may be, but my own leaf-peeping shenanigans really went to a whole new level last week, when I pulled an abrupt U-turn while heading north on route 103 out of Chester. The early evening sun was illuminating the mountainside behind a dairy farm and I felt an uncontrollable urge to both admire and preserve the scene. I knew I would drive by that same farm again hundreds of times, but may never catch it again with that perfect light that gave the appearance of setting the foliage on fire.

Here’s a small sampling of photos taken in the past few weeks:

A photo that cannot do justice to the fall beauty on display at Queechee Gorge.

Fall harvest at the “other inn” up the road.

I couldn’t resist capturing the changing trees on the ridge behind Cleo.

A u-turn in Chester resulted in this unique autumn composition.

Along one of the routes to Montpelier (possibly South Pomfret). 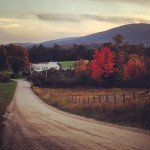 The reds always come out early in the swamp by the CFI.

The big red maple at the gazebo in the center of downtown Ludlow.

The moose swamp at the crest of the Reading-Tyson Road.

Another view of Buswell Pond.

Cows in Pomfret in early fall.