My mother is a very good cook. It’s hard to replicate her cooking, because she’s one part Alice Waters, with her emphasis on fresh, local ingredients; one part Rachael Ray, with her mantra that “easy-to-do” is almost always best; one part Martha Stewart, thanks to her kitchen cleverness; and one part MacGyver, no explanation necessary. Another time, I’ll post some of her time-honored cooking and meal planning tips, such as her advice on which types of cheeses can be successfully frozen and re-served and what to do with leftover cake. This post, however, isn’t directly about Mom’s cooking. It’s about a recipe and, as it turns out, human nature.

The most requested recipe in my mother’s large repertoire, bar none, is a cookie recipe that we call “Tante Evelyn’s Treats,” which was named after my mother’s French-Canadian aunt. Like many immigrant women of her generation, it seemed that the only way Tante Evelyn knew how to show love was through her cooking. Visiting her was always popular when we were children, because she never failed to have multiple homemade sweets freshly baked in her kitchen, that she insisted we eat to our little hearts’ content.

After we opened the inn, it was likewise a treat for all of us when Tante Evelyn visited from New Hampshire to stay with us, share in the cooking chores and generally amuse us with her no-nonsense personality. When she visited near the holidays, she would make batches and batches of her graham cracker treats. A mixture of melted butter and brown sugar is poured over a sheet of graham cracker pieces and, after a mere 10 minutes in the oven, they turn into delicious, praline-type candied crackers. Tante Evelyn would make enough in one afternoon so that my mom could freeze them and have them on hand for an entire year. The days she baked these cookies were, for us kids, always the highlights of her trip to the inn.

Evelyn died many years ago, so we’ll never know exactly how she came about creating her recipe. Nowadays, you can find variations of it all over the Internet, like this one that adds vanilla and pecans and earns a five-star rating from Betty Crocker.  A look through my mom’s ancient Betty Crocker bible that’s now held together by duct tape does not, however, contain this recipe. 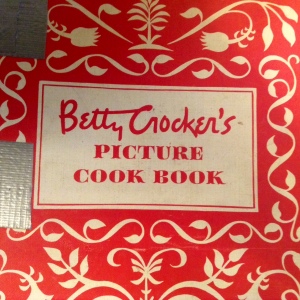 (We don’t know the origin of Tante Evelyn’s recipe. We looked everywhere, including in here.)

Meanwhile, like every other industry, inn-keeping has affiliations and organizations. In the ski region in south-central Vermont where our inn is located, there was once a group called “Snowtown Inns” that was later renamed the ”Okemo Valley Hospitality Association.” In the 1980s, there were 16 inns and motels in the area that were members of this group, which, by the way, is now absorbed into the regional chamber of commerce. My mother was an executive officer of the group and still has a large drawer full of envelopes bearing the group’s logo.

The group met a few times per year and members took turns hosting the meetings. One day, in the late 1980s, it was with much “to-do” that my mother and father hosted the group. After the business was done, they served coffee with an impressive array of nut breads and desserts. I have no doubt that everything was delicious. However, everyone in the group raved about one particular cookie and wondered how my mother made them. Of course, these were the famous Tante Evelyn’s Treats.

When one of the other innkeepers asked for the recipe, my mom was so pleased that her peers loved her beloved aunt’s cookies that she immediately went into her office, printed out the recipe, and made a copy for everyone.

Method:
Break graham crackers in half (along perforation) and place flat on a greased cookie sheet. Melt butter and brown sugar in a saucepan for five to six minutes, stirring constantly. Pour over crackers and sprinkle with nuts. Bake at 350 degrees for nine minutes. Remove from oven and allow to cool. If desired, sprinkle with mini chocolate chips when cookies are removed from oven and still hot.

(There used to be an active industry association in the area just for innkeepers and other motel and lodge owners.)

I was away at college and had no idea that this meeting had taken place, until about a year later when I received a phone call from my mother. She was crying and so terribly upset that it was difficult to understand her. After she calmed down, my mother explained that she had just received her latest issue of Yankee Magazine in the mail. In it, one of the competing inns in her hospitality group had won a recipe contest for……guess what? A delicious graham cracker cookie recipe that was remarkably like “Tante Evelyn’s Treats,” but under a different name with slightly more butter.  Otherwise, it was exactly the same!

I insisted that mom defend her honor and write to the editors. But she’s simply not that kind of person. She bore her disappointment and fury in silence and never even mentioned it to the other innkeeper, who is no longer in Vermont and has been long out of the inn business.

The story reminds me of something my mother once told me when I was a young girl. After observing my mom busy in the inn’s kitchen one afternoon, I had complained bitterly, “I don’t know how to cook!” She stopped what she was doing and put her arms around me and said, “Sharon, if you can read, you can cook.”

I appreciated the gesture, but I know today, just as I did back then, that my mother was wrong. There’s a lot more to good cooking than being able to read or following what might in fact be a great recipe. My mom will always be a better cook and innkeeper than her ruthless competitor and, no matter the variations of it that might be out in the larger world, this particular cookie recipe is best when called “Tante Evelyn’s Treats.”