I am the captain of a team that runs a 100-mile relay race along Vermont’s scenic Route 100, the appropriately named 100 on 100 Heart of Vermont Relay. The race is an exercise in teamwork. The route is divided into 18 segments of varying length and difficulty. Each team usually has six runners, each of whom runs three legs of the race, passing a wristband as a baton to the next runner at pre-determined transition points along the course. Our team loads up the vehicle at about 3:30 in the morning and gets on the road by 4, to make our 6 o’clock team check-in time and 6:30 start in Stowe.

As team captain, I do the planning and race management. I’m pretty detail-oriented and the team generally appreciates that I take care of everything. When I say “everything,” I mean a host of tasks, from registering the team to forecasting our running times for each segment to managing our fans along the course. One year, I predicted the nearly 15-hour running time within two minutes! In essence, I am a “planner,” and my team was following a well-thought-out plan on race day. This year, our plan was to run most of the race with four runners (instead of six) and be joined by another team member mid-race, who would run a 12-mile stretch to help us out.

En route to Stowe early race day morning, the tire pressure warning light came on. I told the team not to worry, because it was just a slow leak in one of the back tires. We had plenty of time to get air, after we got off the highway in Waterbury.  And we did. 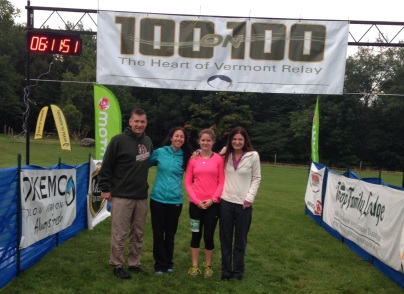 (Our 4 core team members at the starting line. Left to right: Bill, Erica, Bridget, and me.)

After team check-in, we took some team photos at the starting line, watched my cousin Bridget start the race, and then went back to the car. That tire looked pretty soft again—so much so that a runner from another team even pointed it out. My brother suggested I go cheer Bridget on while he and our fourth team member, Erica, changed the tire.  After Bridget ran through the first transition point and proceeded into the second leg of the race, I walked back to the car and found all of our duffle bags, other gear, and cases of water and Gatorade on the grass. When he saw me, Bill shook his head and said with a slight hint of frustration, “There’s no spare.” 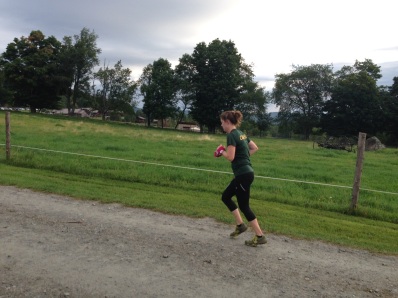 (Bridget completed the first leg and started the second completely unaware of the situation with our team vehicle.)

We loaded back up and headed out to look for a service station, truly believing that the low tire might have been an optical illusion caused by the car tilting downhill on grass. As we pulled out of the parking lot, I stopped a guy directing traffic and asked him how the tire looked. “Pretty flat,” he said. Instead of heading down the mountain, we turned into another parking lot and jumped out to check the tire on level ground. “Pretty flat? Is he nuts?” I yelled. We were looking at metal on asphalt. The tire was completely flat and our race vehicle was not drivable.

We quickly reviewed several possible solutions and decided to have my father bring the spare tire up from Ludlow—where it was sitting in our garage—and  for me to hitch a ride with another team in time to get the baton from Bridget at the next transition point, in about 45 minutes. Since I was also going to be running two legs in a row, we hoped there was enough time to get the spare up to Stowe and on the car, and the four of us to meet at the start of the fifth race segment. 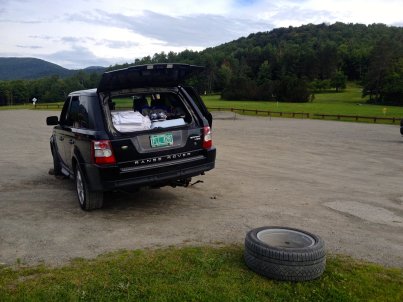 (Unfortunately, this was Bill and Erica’s view for over four hours!)

As it turned out, we were not reunited until after 11 o’clock. While Bill and Erica waited at the starting line in the car for my father to overcome several obstacles of his own on the drive up with the spare, Bridget and I kept running and passing the baton to one another for four-and-a-half hours and bummed rides from other teams to each subsequent transition point. I was truly ecstatic when I heard the familiar sound of a ringing cow bell and looked up to see my brother hanging out the window of our team vehicle and then, moments later, when I passed the baton to Erica for her to complete the remainder of the uphill climb of segment six, outside Waitsfield.

In addition to the grace with which my team dealt with both planned and unexpected challenges, it was extremely heartening how every team we approached for help gave it without question. At the starting line, the “American Bandits” welcomed me, a stranger, and gave me a lift down the mountain. Later, when I explained my predicament to my friend Stacie, her “Sole Sixters” team was enthusiastic about adopting Bridget, while I ran more than 12 miles. After Bridget completed her first run and passed the baton to me, utterly exhausted, Stacie’s calm and smiling face made the difference, as I briefly explained the situation of our team’s catastrophe before turning around to start my run. Then, when Bridget took the baton back over from me for segment five, an acquaintance named Stephanie and her team brought me along to Waitsfield and fed me cookies and water before I was handed the baton back again and started the uphill climb of segment six. 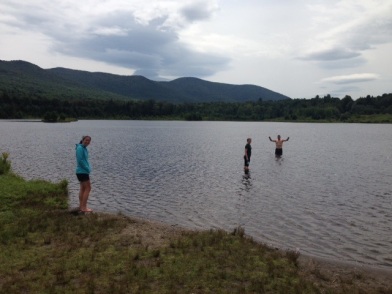 (Erica, Bridget, and Bill in Blueberry Lake during a welcomed break mid-race, while Lee was cranking out 12 miles for the team.)

We finished the race at 8:48pm, by far the fastest performance for my team in the six years we’ve run the race.  And, more importantly, we all had a blast, made a lot of new friends, and gained many new stories to tell than can possibly be told here. It’s a great reminder that the best plan of all is to have a great team to start with, and to have fun, no matter what.