It’s my ultimate “Throwback Thursday.” I landed in Beijing earlier today, after more than 17 years away. There’s at least one volume that could (and will) be written about the nearly three years of my life spent here. The short version is that I started out in a major depression and climbed my way out, bit by bit, until I started to resemble the confident woman that I am today. True story: In my first five months in Beijing, I went from obsessively watching the OJ Simpson trial on CNN to actually working for CNN. And, I still have my press pass to prove it.

Thankfully, I haven’t come back alone. I’m with an old college pal from my George Washington University days, Angela Casey. It’s odd that we took so many of the same courses with the same professors and were only one year apart in school, yet didn’t meet until my senior year. Ange graduated from GW with a degree in East Asia Studies (China Concentration) in 1991. Mandarin was also my language, but my degree was International Affairs (Mandarin Chinese) in 1990. Once we finally met, we became fast and close friends.

We credit Facebook for rekindling our friendship late last summer. There were several Angela Caseys on FB, but only one with the graphic of bamboo as a profile picture with the statement that she speaks Mandarin, Cantonese, and French. I knew immediately that she was my Ange.

Shortly after re-becoming friends, Ange drove up from her childhood home in the Poconos to stay with me and Bruce in Vermont. Over that October weekend, we plotted this Asia trip to meet up with my step-daughter Erin in Laos. It seemed only fitting to begin this new journey where we met up 20 years ago, right here in Beijing.

I still need to reflect on the vast differences — and the similarities — of the Beijing in 2014 with the one I knew well between 1994 and 1997, before I can say anything meaningful about it. Not to mention how different we both are as women in our mid-40’s compared to the exuberant self-proclaimed world travelers we were in our mid-20’s. However, what I can share now are a few photos and will add more soon.

And, I can say from the very bottom of my heart that there’s no one I’d rather come back to Asia with after all this time. Thanks, Ange, for stepping back into your role as willing partner in crime (so to speak) after such a long time. 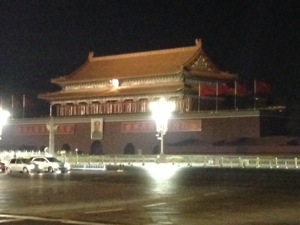